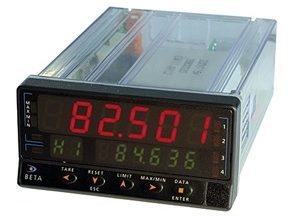 BETA-D is designed for counting and totalising applications or as tachometer with totalizer which accepts pulse signals generated by a wide range of sensors in the market.

With a 6 digits display you can visualize up to 3 partial counters and a 8 digits display where it is visualized simultaneously one of the three totals.
In the tachometer-totalizer case it is possible to measure the velocity in programmable units (Flow) and the accumulated total at the same time (Cost).